“Somewhere else is just someone else’s back yard.” – Axel Hoogland

I have been actively looking for a job outside of Iowa for the last year. Specifically in Georgia or North Carolina to continue with my current company but I met no success.

My stated reason was to get out of the cold. I hate winter and want to drive my nice RWD cars year round, that was it. I wasn’t able to leave, despite an interview in North Carolina in August. After that I  decided to be content where I was. Eventually I started getting more ingrained in the community. I joined a dancing team at the University of Northern Iowa. We are learning to do the cha cha, rumba, triple time swing, waltz, foxtrot and tango. In December 2013 I couldn’t even have told you what those dances were. Now I can dance some of them with enough skill to trick people who don’t know much about dancing into thinking I actually know what I’m doing 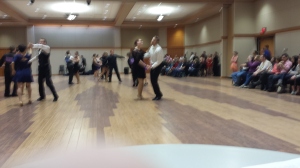 Everyone who knew me before I was 24 is pretty surprised that I do so much dancing these days.

I also got involved in mentoring kids. Specifically, via The Job Foundation. Going into it I wanted to help the kids learn. Little did I realize that I’d be learning just as much as they have, maybe more. Working with kids as an adult has exposed me to a whole new world. Well I guess it’s exposed me to the world of a child, again. I am able to take these kids to events that are old to me and they are fascinated by stuff that seems mundane to me. I took them to a shop recently. We played with an engine hoist for 45 minutes. They picked me up. They picked each other up. They picked up just about everything in the room. They were learning how a hydraulic jack works, without even knowing it. Sneaky me.  I can not remember in my memory having that much fun with an engine hoist. After that they spent 45 minutes taking a small wooden table apart with screw drivers. Again, they loved it. Another time I took them to the shop they played with a car jack for the same amount of time. It only picks you up 10”. They must have ridden up and down that thing 20 times. Kids don’t need much to be entertained. Just something new. And the same goes for adults!

“Iowa is so boring. The same old thing happens everyday. There’s nothing to do here.” This is what a lot of people complain day in and day out. And they have a valid point, in their own mind. For them, their days all seem to run together. They go to work, the store, maybe the gym. They see the same friends. Eat the same lunch etc. It’s mundane. Boring. Not thought provoking.

A cool dirt bike racing indoor event I went to, in my own town.

But it doesn’t have to be that way! Challenge your norm! You can seek out dissenting opinions in any city. Especially a city as big as the one I live in (100,000). Go to a new place to eat. Take a new route to work and look around. You might be surprised what you find. Change up where you go after work one day. Explore your city. Talk to new people. They probably do something different from you everyday and maybe it’s something you can find an interest in. If you don’t think you can, try acting interested in what they are telling you. Actions can drive changes in feelings. The point here is that a change can appear small at first but in the long run could provide some some life changing opportunity.

I gained access to this shop via a mutual friend. It’s sure a great opportunity. I help out there sometimes. Sometimes I do my own projects. Everyone benefits. This all came about from one chance visit.

Visited a Mormon Church. In town.

Another thing I’ve been doing lately has been purposely exposing myself to people who I perceive to have different religious beliefs than I do. I am Catholic. With a small group from my church we have started visiting other denominations of Christianity as well as other religious centers. We visit 1 a month (2nd week/weekend of the month). Thus far we have visited with Lutherans, Mormons, Universal Unitarians and have in the works plans to visit a Methodist church and a Mosque. From the start I had to ask myself what my goals were with visiting these places. Did I want to come in telling these people how I disagreed with them and that they were going to hell? Honestly there was a small part of me that wanted to do that. But why? What good would that do anyone? I have worked very hard to only ask genuine questions to understand others beliefs without volunteering my own, unless I’m asked. This has proved to be a great way to meet people and build mutual respect. You find that often people are really more alike than different. Why do we put ourselves and others in boxes? I think it’s often because people are afraid of what they don’t know. If you are brave enough to just venture out a bit and challenge your norm, you’ll find where you are is a more  interesting place than it used to be.