It’s been almost a year since my last post and I didn’t do an end of 02017 or  02018 post. Since the start of a year is a relatively arbitrary time in our trips around the sun and happens at different times in certain countries I think a minor update could be appropriate.

A few big things happened this year.
I started a financial advising business.
I bought a duplex.
I started funding a chicken farm in Haiti.

In August 2018 I started Highland Wealth Management. I met Mike Finley 4 or 5 years ago. He teaches classes at the college in town about personal finances. I learned a lot from him and continued on from there. I started this business because I saw how inefficient most people’s finances are. My main goal with this business is to save people hundreds of thousands of dollars over their life. This means keeping more money with the investor and having less go to the advisor. If you look at how much most financial advisors take, it’s a lot 1% to 2.5% a year, of your money! The actual value being provided is very very little. With a few hours of time investment with a fiduciary financial advisor, most people can save more money over their life than they will make in years of working.

I bought a duplex in May 2019. As part of my own personal financial journey I thought getting into owning a rental property might be a good idea. I am living in one side of the duplex and renting the other side. Below are the calculations i used to justify this purchase. I assume the return of the stock market is about 9%-10% a year. A duplex has to return above that for me to even consider it. The below also does not take into account the equity build up for the mortgage pay off. 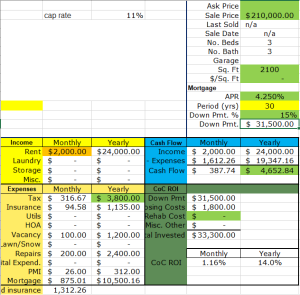 Many of my friends are into rental properties. I had been living in an apartment for about 7 years so I thought it was time for a change. I think this will help me in my advising business also if people have rental properties I can help them determine if it’s really a good fit for them or not. While some places are good, I have also seen many cases, for example of inherited properties, that people should just sell.

On purchasing/financing the property. I ended with a 30 year loan at 4.25%. At the time if I’d bought a house the rate was 4%. They were able to raise the rate .25% on a duplex “just because”. That being said, since I was owner occupying the property, I was able to get a 30 year loan with a lower rate than if I was buying it commercially. At the time a commercial loan was 5% and the term was only 20 years, instead of 30. I like the lower rate and longer timeline because it allows a better, more sure, cash flow. For me, cash flow is a key thing for a rental property. I also purchased a place that needed very little as far as work done to make it livable, actually no work. While there are a few cosmetic things I could fix such as a few holes in the siding or other little things like that, this property did not require any major renovations. For me, that was a good first choice.It even came with tenants in one side. That was also nice as when I signed the mortgage the old owners signed a $250 prorated check for the rest of that months rent! The next day as I was moving in the tenants paid me for the next month. So while this has all worked out well for me so far (4 months in, through summer), I still can not say it’s for everyone. There are many other blogs and sources of information on rental properties if you are interested. Or ask me any questions you might have!

If you recall from my 02016 year end review, I had bought into a solar field at the power company at my old apartment. When I moved I had to sell those back to the company. I recooped about $880 from that investment that was $1080. In the end it was about a wash as far as money goes. But the environmental impacts were a positive that were not directly measured, at least not by me.

I took the money from that sale and bought an electric lawn mower for my new house! I bought an Ego 21” deck, self propelled (push) lawn mower for $500 at Home Depot. While I could have gotten a cheap gas powered push mower for as low as $100, a self propelled Honda gas mower can be as much as $500 also so purchase price was not really more expensive than a comparable gas mower for the Ego electric mower. This was my first foray into electric vehicles (after my self build electric bike, which used a kit, and was a bit of a failure, in execution. The concept of electric bikes is still good. There are many good electric bikes built by manufacturers. I would recommend one of those over a kit). (I also have an electric coffee mug which I really like.) I am very happy with the electric lawn mower. I use the self-propelled all the time as well as the mulching, using as much energy as possible, which leads to the shortest battery life. It usually mows my whole lawn, which takes about 30 minutes. In the off chance it doesn’t I just plug the battery in, which fully charges in 1 hr, and finish up the last 10 minutes of mowing. Not having to deal with gas or oil or spark plugs is fantastic and one reason I expect electric to take over for most gas application in the near future.

I started a chicken egg business/farm in Haiti with Jhon. I have mentioned Jhon before as far as helping him via paying for his schooling. Jhon told me of an idea he had for a chicken farm. He believed he would be able to sell eggs to local stores. I was hesitant but provided enough money to buy 30 chickens ($15/chicken) as well as to build out a coop, a few hundred dollars. Jhon set up all the business as far as having someone take care of the chickens, his cousin, someone deliver the eggs to business, a neighbor, as well as a different person to collect the money. Jhon is actually studying in a different city than the chickens are. This is a great hands off business, as far as the day to day running. Jhon said the alternative for eggs is they are shipped in from the Dominician Republic. The price of a chicken is $15 and the monthly return is $2/chicken. In less than 1 year a chicken has paid for itself! If the chicken lives 2 years it’s provided a 220% return! After about 3 months of seeing the business work with 30 chickens I decided to purchase 70 more to get the business up to the full size Jhon initially envisioned. The farm now has 100 chickens.

Jhon is using this money to fund the rest of his college himself. I am no longer paying for his college directly! This is very exciting for me for 2 reasons.

I recently finished a book called “The Prosperity Paradox: How Innovation Can Lift Nations Out of Poverty”. Along with other books I’ve read like “Toxic Charity” and “When Helping Hurts” I think that investing in business, teaching a man to fish, is much more valuable in the long term than just giving money. I am hoping to continue to support Jhon in his various entrepreneurial ideas going forward.