I have seen complaints from Republicans about how the $600/week unemployment benefit has worked out. There are many complaints that it is too much and is disincentivizing people to go back to work. I agree, to some extent. If you give people incentives to not go back to work, they obviously won’t go back! But we should consider if there is a better alternative. $2,400 month (4 weeks) for people is a lot, on top of any other planned unemployment benefits. As I recall Andrew Yang was proposing $1,000 month for people as a basic income. There was huge push back on “How would you pay for that?” despite Yang having a very clear way to pay for it. (see picture below). 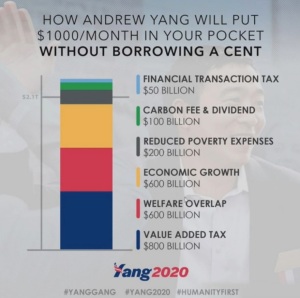 $2,400/month is 2.4x the $1,000 proposed. Why was it so much? My understanding is it was set at $600/week to get “the average” worker too 100% of their pre-layoff income. I am unclear why that was a goal. I think there could be a little personal liability to try to cover a little of your lost earnings when there is a mess like we are in. But what I really want to point out is the PPP cost $669 billion of which most went to workers (per the law) and a bit was available to cover utilities etc.

Why didn’t we just let people be laid off and collect unemployment, give businesses a much smaller lifeline (25% of $669 billion to cover utilities etc) and let the rest be used for a UBI to some extent. I don’t even care if I was personally left out of the UBI. Give it some arbitrary cut off of $50k or less a year 2019 income. That would have been $500 billion dollars for 4 months.

$500 billion could have provided a UBI of $1,000/month for 125 million people for 4 months. In 2018 there were only 150 million people working full time so that is nearly the full amount of people! Why did we have to use the PPP, serve less people and make people continue to be tied to their work? We are so obsessed with tying people to a job, it is insane.

It is almost as crazy as the feeling for employers that they “Need to get employees back to the office asap”. Many people have been working from home for 4 months.  If people have been successfully working from home for 4 months, what is the rush to get them “back to the office”? I understand some people need to be in the office. Personally my job has some interaction with manufacturing so I am in the office every day now. But many of my colleagues are successfully working from home. I don’t see a reason to “rush them back”. It seems to me the only reason to do that is because of some deeply ingrained mistrust of employees from the very upper echelons of business that if employees are not being watched like hawks they will be screwing off. Some companies are getting it, like Square, which seems to be transitioning to fully work from home permanently.

Another thing I don’t get is how Republicans, “the media” and many essential workers are angry at people who are unemployed and receiving $600/week. On a very surface level it makes sense, you see someone “getting paid to do nothing” while you are a hard working essential person. Think “I am paying for that lazy loser.” Etc. But realistically, most of the laid off people would be happy to have continued to keep working, or at least being able to provide for their families, if possible. There is an odd set of circumstances that some people are laid off adn some aren’t. But the “essential vs unemployed” fight is a fight between THE SAME GROUP OF PEOPLE! Or at least they were part of the same group of people until right before some of them lost their jobs. It is crazy to me that the “essential” people so quickly turned their anger towards the people who are getting money from the government program that it is likely they could have received money from too except for a specific set of circumstances. That person receiving $600 has no impact on your life. You are not receiving less because of that, except for the fact that you all are not demanding a UBI!

I will share a meme (below) to try to get the point across. Not that I hold anything personally against Jeff Bezos (although many people do). But it’s trying to make a point. 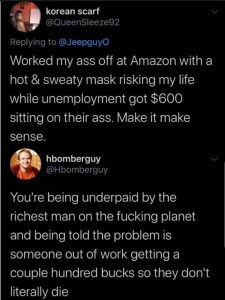 So, anyone who is working a job currently, please stop being mad at the unemployed people who got $600/week for a few months. Start being mad at the government for a shitty response. Then start writing your senators and House of Representatives and asking why a Basic Income is still not being considered, for ALL!